The hypoxic zone in the Gulf of Mexico, documented since 1985, has been linked to nutrients from states in the upper Mississippi River basin, and particularly to agricultural activities in those states. In response to this major national water quality concern, the US Environmental Protection Agency (USEPA) Science Advisory Board has called for 45% reductions in riverine nitrogen (N) and phosphorus (P) loads in the Mississippi-Atchafalaya River basin (MARB). To accelerate progress towards nutrient loading reductions, twelve states within the basin were tasked with developing nutrient loss reduction strategies (Arkansas, Indiana, Illinois, Iowa, Kentucky, Louisiana, Minnesota, Mississippi, Missouri, Ohio, Tennessee, Wisconsin). Representatives from the land grant universities within these twelve states came together to form SERA-46, a multi-state committee administered by USDA NIFA, to promote and coordinate multi-state research and extension activities related to Gulf of Mexico/Mississippi River Basin water quality issues.

As each of the twelve states begins to implement their state-based nutrient strategies to reduce the amount of N and P each state sends to the Mississippi River, it is vital to also track and report the implementation or adoption of conservation practices that reduce nutrient losses from agricultural areas. Agricultural conservation practice adoption is officially reported to the Mississippi River Gulf of Mexico Watershed Nutrient Task Force (that is, the Hypoxia Task Force, HTF), USEPA, and to Congress. However, there is no consistent reporting framework for all twelve states to use, resulting in a variety of reporting methods and conservation practice implementation data that are not consistent from state to state. In response, members of the SERA-46 multi-state committee have recently been funded by the Walton Family Foundation to develop a framework for tracking and reporting the implementation of agricultural conservation practices that is intended to eventually be the single reporting framework used by all twelve states for the next several decades. 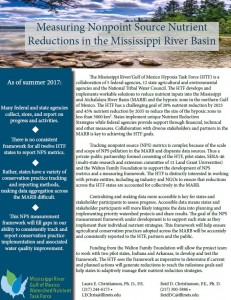 The project team has worked with partners at USEPA to develop this factsheet about the ongoing project work. Also, checkout the current version of the resulting common data work here.

The Illinois Drainage Research and Outreach Program (I-DROP) at the University of Illinois is all about practical solutions to improve agricultural water quality.